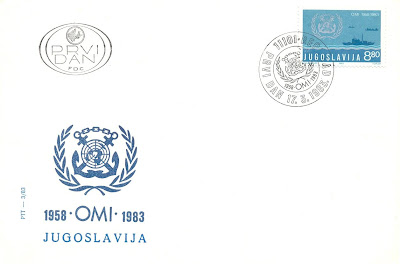 The First Day Cover commemorates the 25th Anniversary of the Organisation Maritime Internationale or better known as International Maritime Organization, UN. The stamp and cover was issued on 17.3.1983 by the erstwhile Yugoslavia. This cover was sent to me by Karoly from Serbia.The International Maritime Organization (IMO), formerly known as the Inter-Governmental Maritime Consultative Organization (IMCO), was established in Geneva in 1948, and came into force ten years later, meeting for the first time in 1959. The IMCO name was changed to IMO in 1982. Headquartered in London, United Kingdom, the IMO is a specialized agency of the United Nations with 169 Member States and three Associate Members. The IMO's primary purpose is to develop and maintain a comprehensive regulatory framework for shipping and its ambit today includes safety, environmental concerns, legal matters, technical co-operation, maritime security and the efficiency of shipping. IMO is governed by an Assembly of members and is financially administered by a Council of members elected from the Assembly. The work of IMO is conducted through five committees and these are supported by technical subcommittees. Member organizations of the UN organizational family may observe the proceedings of the IMO. Observer status is granted to qualified non-governmental organizations. The IMO is supported by a permanent secretariat of employees who are representative of its members. The secretariat is composed of a Secretary-General who is periodically elected by the Assembly, and various divisions such as those for marine safety, environmental protection, and a conference section.
Posted by OldSalt at 2:37 PM