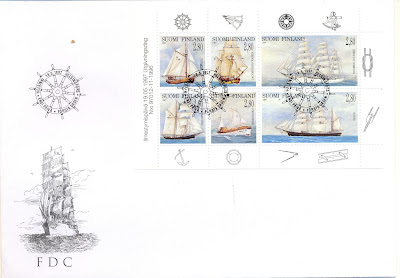 The stamps on the FDC displayed were issued on 19.5.1997. The six sailing ships on the stamps were: -
(a) Astrid - Astrid, built in 1918 in Scheveningen, the Netherlands, was built as a cargo ship, and traded in the Baltic until the mid seventies. A period of dubious trade under the Lebanese flag followed, until a fire destroyed the ship and she was found off the English coast in 1984. Her strong hull survived, and she was saved by two British ex naval officers, who used her as a sail training ship for young people. She was given her imposing rig and made Atlantic crossings. Since 1998 Astrid is back in her native Holland and she has been fully restored and equipped as a luxury sailing ship.
(b) Jacobstads Wapen - The Jacobstads Wapen is a modern replica of an 18th century galeas built in Jakobstad, Finland between 1988-1994. She is built according to blueprints by the Swedish warship architect Fredrik Henrik af Chapman (1720-1808) dating from 1755, the oldest vessel blueprints found in Finland. She is classified by the Finnish national board of navigation as a passenger, special-purpose vessel. The 18th century galleon Jacobstads Wapen was sold off in Amsterdam. She has been used as a symbol for Jakobstad but as of late has had financial problems. She participated in the festivities at the 300-year anniversary of St. Petersburg, Russia in 2003. In 2005 it was discovered that some of the woodwork had deteriorated and is currently awaiting renovations.
(c) Suomen Joutsen – The fullrigger Suomen Joutsen (ex Laënnec, ex Oldenburg)
Ship was built in St Nazaire 1902 and sailed as a cargo vessel under French and German flags until 1930. She was purchased by Finland as a training vessel for the Finnish navy in 1930 and renamed Suomen Joutsen (The Swan of Finland).
She made eight training voyages in 1930’s and served as a mothership and support vessel during the WWII.
In 1960’s she was rebuild as a stationed Naval trade School. The Suomen Joutsen became a museum vessel in 1988. She is currently stationed at the Forum Marinum, Turku, Finland.
(d) Tradewind - The Tradewind is a Dutch topsail schooner. She was built in the Netherlands in 1911 as a herring lugger named Sophie Theresia. In 1952, she was refitted for use as a coastal merchantman and an engine was added. She was renamed Aaltje en Willem. In the 1970s, when it was no longer economical to run her as a commercial vessel, she was converted to a house-boat, then later to a charter boat.
(e) Merikokko lifeboat - 1997 The Finish Lifeboat Society celebrated its hundredth anniversary. The society has over hundred vessels and boats, and more as 10.000 members. To honour the society one of their lifeboats is shown, she is the MERIKOKKO and was built in the 1930s, she operated from Utö. She has an engine, but is also fitted out with sails
(f) Sigyn - Sigyn, built in Göteborg 1887, now museum ship in Turku, is the last remaining wooden barque used for trade across the oceans. At the time she was built there were thousands of similar vessels, but she was one of the last ones built. She was quite small even for her time, considering she was built for long-distance trade, but well built and considered fast and beautiful.
This lovely FDC was sent to me By Brita.