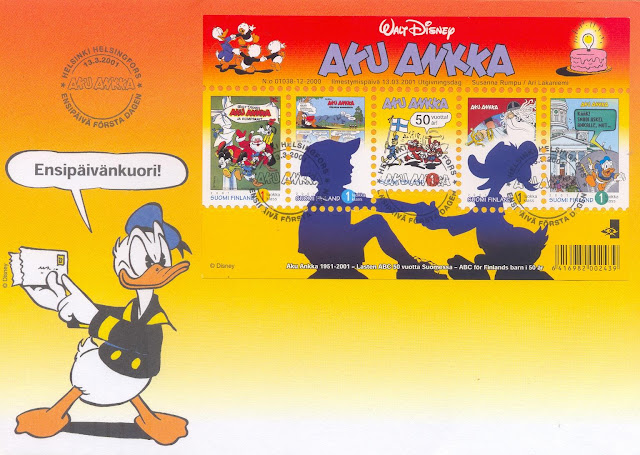 So far, Donald Duck has been the most popular weekly magazine in Finland. It entertains over a million readers every week and is educational too, in teaching a third generation of Finnish children to read and use good Finnish. The Donald Duck magazine advocates the use of correct and eloquent Finnish language and promotes reading and writing in general. It has been a candidate for the Finnish Agricola literature prize and has the whole-hearted support of Finnish teachers.
Aku Ankka (Finnish for Donald Duck) is a Finnish weekly Disney comic’s magazine published by Sanoma Magazines. The first issue was published on December 5, 1951 and sold 34,017 copies. The first issue, with a special Christmas theme and the Snow White story published later in the 1950s, are very prized collectors' items and can fetch a price of several thousand euros on the collector market. Until 1956, the magazine was published monthly, between 1956 and 1960 biweekly, and since 1961, once a week every Wednesday. As of August 2010, 2893 issues have been published.
Despite being a part of a multinational franchise with most stories produced abroad, Aku Ankka has become a cultural icon in Finland. This is largely due to the magazine's colourful and innovative use of the Finnish language. Many characters' names are Finnish language spoofs of established celebrities' names. In 2001, in recognition for their work for the Finnish language, the Finnish language department of University of Helsinki’s Faculty of Arts gave the Kielihelmi-award the editorial team. With a circulation of over 320,000 and more than a million readers weekly,
Aku Ankka is the most popular weekly publication in Finland as well as the largest edition per capita in the world for a Donald Duck magazine. There is a popular belief that Donald Duck was once banned in Finland for not having any pants. This myth was sparked up by an incident in 1977, when Helsinki councilman Markku Holopainen proposed discontinuing the use of city funds for the purchase of Aku Ankka comics for youth centres, as a reaction to financial difficulties. The following year, as Holopainen was running for a Parliament seat, his opponents then called him "the man who banned Donald Duck from Helsinki". A similar incident also took place a few years previously in Kemi and international reports then exaggerated the situation with claims that the character's attire and his unmarried relationship to Daisy Duck were the culprits.

The Aku Ankka comic is now more popular in Finland than in the country of its origin, the United States (where Disney is better known for its cartoons and films than comics). The United States Donald Duck cartoonist Don Rosa is exceptionally popular in Finland, and has acknowledged this by creating The Quest for Kalevala, a Donald Duck story specifically set in Finland. Pia gave me this lovely FDC. This Five-stamp miniature sheet was issued on 13 March 2001 The magazine is celebrating its 50th anniversary in Finland this year. Designers of these lovely stamps and cover were Susanna Rumpu and Ari Lakaniemi
Posted by OldSalt at 2:42 PM