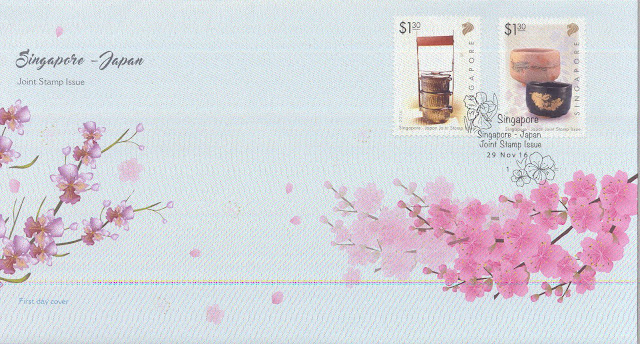 Singapore Post Limited (SingPost) and Japan Post Co., Ltd. (Japan Post) released a joint stamp issue by Singapore and Japan to commemorate 50 years of strong and warm bilateral relations between the two countries. Both countries have developed excellent relationships in many areas, including trade and investment, culture, and their people.
The stamps feature ceramic works by renowned potters of the two countries: Singapore’s Mr Iskandar Jalil, and Japan’s Mr Toyozo Arakawa.
Thank you Shashi.
Posted by OldSalt at 7:24 AM 20 comments: 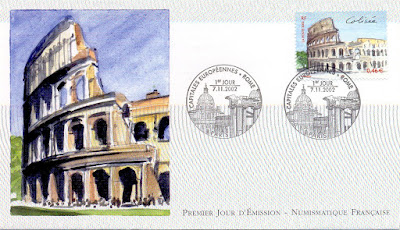 The Colosseum or Coliseum, also known as the Flavian Amphitheatre, is an oval amphitheatre in the centre of the city of Rome, Italy. Built of concrete and sand, it is the largest amphitheatre ever built. The Colosseum is situated just east of the Roman Forum. Construction began under the emperor Vespasian in AD 72, and was completed in AD 80 under his successor and heir Titus. Further modifications were made during the reign of Domitian (81–96). These three emperors are known as the Flavian dynasty, and the amphitheatre was named in Latin for its association with their family name (Flavius). 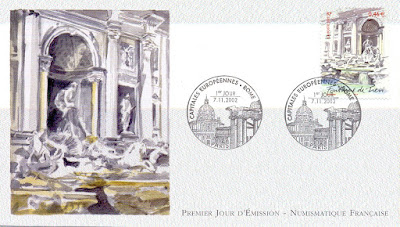 The Trevi Fountain is a fountain in the Trevi district in Rome, Italy, designed by Italian architect Nicola Salvi and completed by Pietro Bracci. Standing 26.3 metres (86 ft) high and 49.15 metres (161.3 ft) wide, it is the largest Baroque fountain in the city and one of the most famous fountains in the world. The fountain has appeared in several notable films, including Federico Fellini's La Dolce Vita. 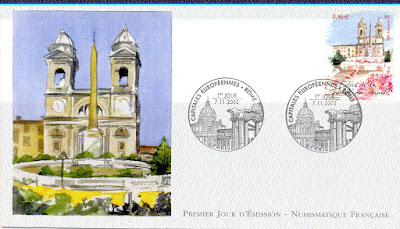 The church of the Santissima Trinità dei Monti, often called merely the Trinità dei Monti is a Roman Catholic late Renaissance titular church in Rome, central Italy. It is best known for its commanding position above the Spanish Steps which lead down to the Piazza di Spagna. The church and its surrounding area (including the Villa Medici) are the responsibility of the French State. 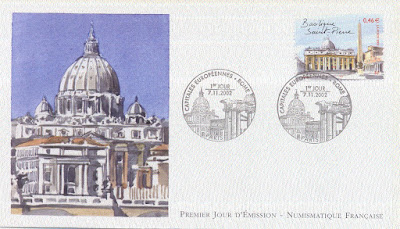 The Papal Basilica of St. Peter in the Vatican or simply St. Peter's Basilica is an Italian Renaissance church in Vatican City, the papal enclave within the city of Rome.
Designed principally by Donato Bramante, Michelangelo, Carlo Maderno and Gian Lorenzo Bernini, St. Peter's is the most renowned work of Renaissance architecture and one of the largest churches in the world.  While it is neither the mother church of the Catholic Church nor the cathedral of the Diocese of Rome, St. Peter's is regarded as one of the holiest Catholic shrines. It has been described as "holding a unique position in the Christian world" and as "the greatest of all churches of Christendom".


Catholic tradition holds that the Basilica is the burial site of Saint Peter, one of Christ's Apostles and also the first Pope. Saint Peter's tomb is supposedly directly below the high altar of the Basilica. For this reason, many Popes have been interred at St. Peter's since the Early Christian period, and there has been a church on this site since the time of the Roman Emperor Constantine the Great. Construction of the present basilica, which would replace Old St. Peter's Basilica from the 4th century AD, began on 18 April 1506 and was completed on 18 November 1626.
Posted by OldSalt at 7:19 AM No comments: 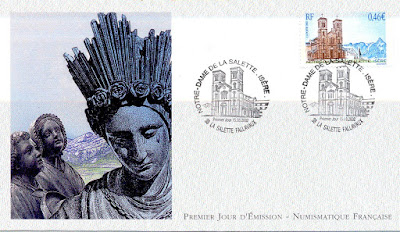 Posted by OldSalt at 7:18 AM No comments: 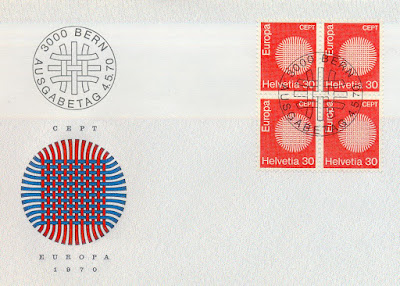 Wattle is a lightweight construction material made by weaving thin branches (either whole, or more usually split) or slats between upright stakes to form a woven lattice. It has commonly been used to make fences and hurdles for enclosing ground or handling livestock. The wattle may be made as loose panels, slotted between timber framing to make infill panels, or it may be made in place to form the whole of a fence or wall. The technique goes back to Neolithic times.
These Swiss stamps depict the Sun composed of 24 interwoven fibres in a Wattle. 1 for each 1970 CEPT member. Designed by Irish Artist Louis Le Brocquy.
Posted by OldSalt at 7:06 AM No comments: 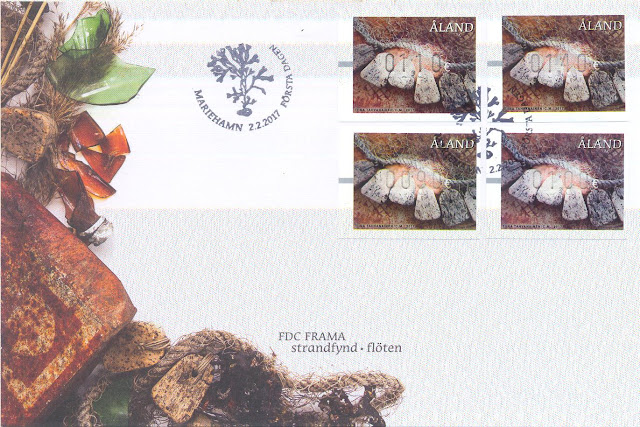 This motif is the third of a 3-year series featuring beach finds. The 2017 label shows cork floats.
Thank you Ella.
Posted by OldSalt at 7:08 AM 1 comment: 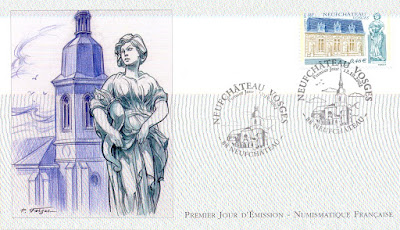 Neufchâteau is a commune in the Vosges department in Grand Est in northeastern France.
Inhabitants are called Néocastriens.
The Church of St. Nicolas, (shown on the stamp and cover). Church of Saint Nicholas of Neufchâteau, Lorraine, France, built in  Romanesque and Gothic style. Renaissance tomb and altars are from the XVIIIth c.
Posted by OldSalt at 7:05 AM No comments: 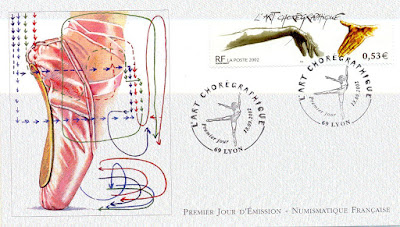 Choreography is the art or practice of designing sequences of movements of physical bodies (or their depictions) in which motion, form, or both are specified.Choreography may also refer to the design itself. ... In dance, choreography is also known as dance choreography or dance composition.
Posted by OldSalt at 7:13 AM No comments: